I am the proud driver of a 1987 VW Caddy pickup that I stripped down completely and rebuilt from the ground up (When I say ‘I’…I obviously had help from a panelbeater and mechanic). This project took me the better part of 2 years to complete and I am extremely proud that I could take something that belonged on a scrapheap, and with my own vision, bring it back into 2017 with style. 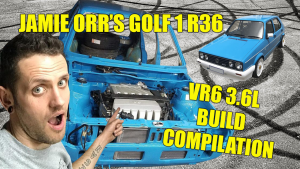 That’s why when American entrepreneur and petrol head Jamie Orr, undertook the challenge of building a 3.6 litre V6 CitiGolf in only 7 days, I was immediately captivated by his story, not only because he got the backing of VW and a range of local companies, but because the Citigolf is dear to many South Africans and it is our own icon.
He makes a living by travelling the world and buying cars, and he fills shipping containers with these car part and imports it back to the USA. He has built up years of experience and knowledge on how to ship these parts and complete cars around the world. His company Orchid Euro just started as a hobby and it has now become a lucrative full time business.
This was in fact not the first time that Jamie has been to South Africa. He first got a taste of our car scene as a judge at the VDUB campfest, and that’s when he realized how big the Citigolf craze is.
Jamie Orr chose South Africa because the CitiGolf was produced in our country until August 2009 after 25 years on the line, and this meant that there were late models produced here that were not seen anywhere else on the globe, some of these models included the Deco, VeloCiti, CitiRox and the Citi Mk1.
Jamie opted for a two tone blue and white CitiSport which is also one of the Citigolfs solely produced for the SA market. 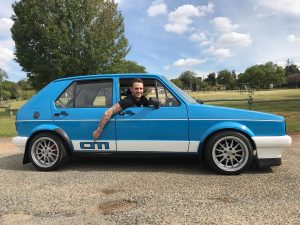 He imported a 3.6 V6 engine and gearbox from the USA which was taken out of a Passat estate with the original wiring harness and computer box, all of which had been pretested before the engine was sent to Africa. The reason behind importing an American engine was because he didn’t want any registration issues with the authorities when taking car back to the USA. He also needed assurance that the engine would run when they put in the car, due to his tight 7 day deadline to build this car for VDUB campfest, South Africa’s biggest VW car show. Jamie also brought a host of parts for the build from the USA so that his build would go easier, some of these parts included engine mounts, a radiator and a set of 16 inch BBS wheels.

After the car was showcased at VDUB campfest he drove the car to the VW production plant in Port Elizabeth to board a blue and white, two toned ship that weirdly resembled his Citigolf. From PE the car heads north to Germany, where he will meet up with the car to complete all finer adjustments and detailing on the car.
Then in May he will fly back to Germany to drive the car across Europe to Worthersee in Austria. Only then will he take the car back to USA where import laws are very strict, so the car must be 25 years old to be allowed into the country as a classic, where it will join the rest of his collection. 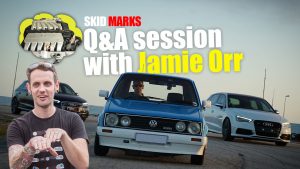 Is this the first car you are going to display at Worthersee?

A: No, I have also displayed a completely restored Golf 3 Harlequin and in 2017 I took my 2 – door fox (South African Passat)

How did it feel driving a 3.6 litre V6 on the Aldo Scribante track?

A: It was completely unexpected for VW to invite me to the track. The suspension and brakes setup was bought off the shelf from South African suppliers, and paired with the standard V6 engine and ECU it drove like a factory car, but it was much lighter and faster. I used tiny 16/165/45 so the power was overwhelming in 1st and 2nd gear so the drag race was pathetic, but it was amazing how much power it still had in 4th and 5th gear, it was just incredible.

A: Volkswagen SA offer factory tours regularly but because it was off season they made an exception to allow us in, but if you are in Port Elizabeth anyone can visit Auto Pavillion and the entry fee is very reasonable.

What is your most memorable moments in SA?

A: Last year when I was in SA we visited a national park in the north of the country. I was driving a VW cross Polo when a black rhino appeared parallel to us, I went a little faster and the rhino started running about 100 metres away from us but it felt like he was right beside us on this dirt road. So we riding into the sunset with this rhino running beside us and at a point it felt like a scene from Fast & the furious when Paul goes his down his road and Dominique down the other road, and that was amazing, we don’t get to see that in the USA.

How was the drive across SA?

A: It was a great experience being able to drive this car that we pieced together in 7 days across such a beautiful country, it is definitely a once in a lifetime experience that I got to share with some of my good friends from America and I hope that some day I can come back to SA and do it again.

Which engine should you put into your spin car?

New Volkswagen Polo launched with more bass for your buck 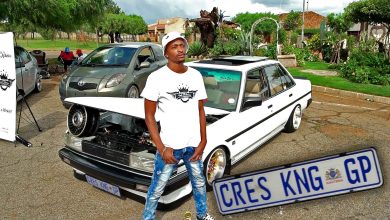 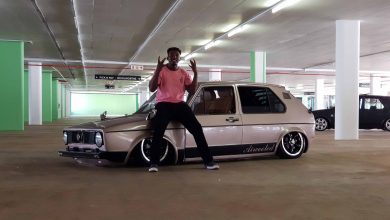